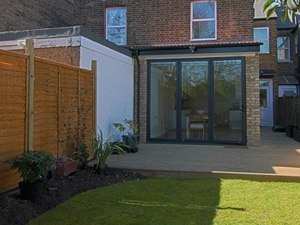 If you need a reliable Liverpool builder for kitchen extensions then Fiveways Contractors has to be your first port of call. If you’ve already contacted other builders in Liverpool and have reservations we’re confident that you may even be your last port of call! Such was the case with a Garston family, the O’Neills. They had contacted a few contractors in Liverpool to build a kitchen extension but remained unconvinced by all those who came to visit. Having a very limited and tight budget with little room for manoeuvre so they needed to be 100% sure that they chose the right builder to undertake the work.

As is usual, we visited Mr. and Mrs. O’Neill to talk through their plans, made suggestions for improvements and sent a full proposal with costs breakdowns and timescales. We understood that they had a strict budget so tailored the proposal to suit with a guarantee that we would not go over budget or over schedule.

The building work in their 1960s semi-detached home was straightforward and resulted in the family having extra living space and a full aspect on their back garden with the inclusion of bi-folding doors. The project was finished a week ahead of schedule and, as promised, bang on budget.

FOR A CONTRACTOR YOU CAN TRUST, FIVEWAYS ARE A MUST...

For extensions, conversions and all manner of domestic building work call: